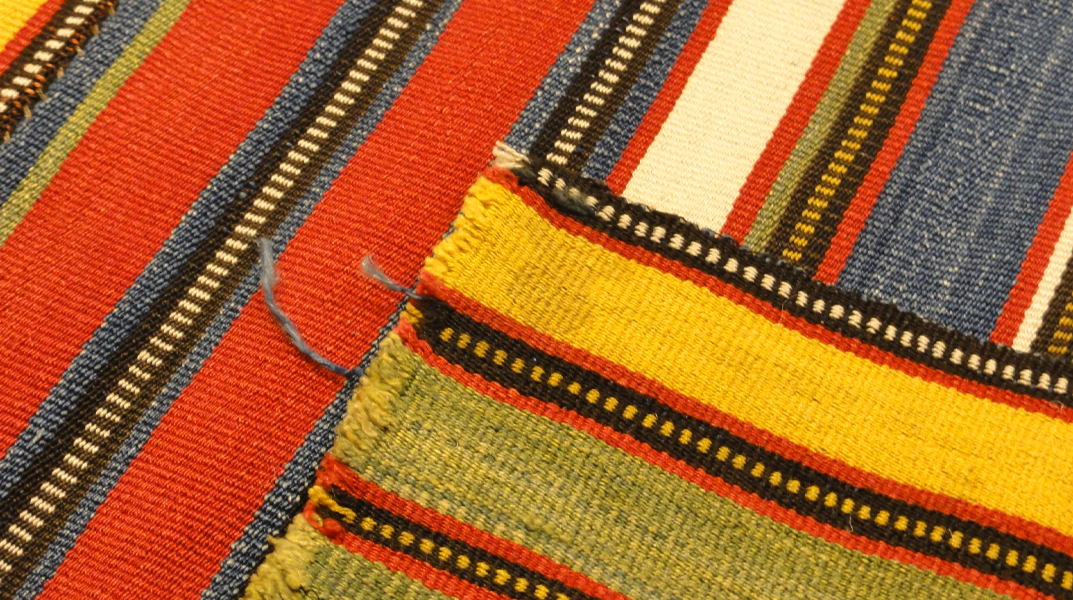 To better and more accurately understand the difference between kilim and jajim, it is better to have definition of both, at first. Then we name the main differences between Kilim and Jajim. It goes without saying that the variety of these products is very wide and there are few people who are fully acquainted with all types of carpets and kilims.

Jajim is one of the handicrafts that is woven, has no lint and is relatively thick and can be used on two sides. Jajim is made of wool or cotton or a combination of both. Jajim is woven in areas of the west and northwest as a bedding, bed twister and sometimes used on the table.

Of course, Jajim has different names in different regions. For example, in Ilam, it is known as Joul. In the same way, the machine with which the jul is weaved, is called Joulai or Joulahi and the person who weaves Joul is called Joulahe. Although a device is used in Jajim weaving, but it relies entirely on the hand and is a completely manual art.

Jajim is usually woven in four boards with high length and low width, then the boards are sewn together.

Today, Jajim is also produced by machine, but it will definitely not have the intimate and traditional feel of handmade Jajim.

The patterns woven in Jajim are colorful and striped, stepped, congressional and checkered. Chichaklameh Jajim was the most famous with a combination of colors and rhombus patterns in striped colors in village and the city.

What is a kilim?

The kilim has a smooth and uniform surface without lint, which is composed of warp and weft. In fact, kilim is a type of carpet without lint and is in the category of carpets. The thinner and softer warp and weft, the greater the quality of the kilim. For this reason, fleece under the throat and armpits of sheep is used for kilim weaving.

Why fleece is used to produce and weave kilim? Because fleece has high flexibility and durability, in addition to paintability properties.

There are four types of kilim weaving machines: plain weaving, machine weaving, jajim weaving (it has two purposes and it is used for weaving kilim and jajim) and needle kilim (somak).

Simple, two-surface or flat (traditional) kilim: It is thinner than other types of kilims. The patterns on both sides of the kilim are the same and both sides can be used. Qashqai, Saneh and Bijar kilims of Kurdistan and Musnad and simple kilims of Ardabil, Semnan and Zanjan are among this category of kilims.

One-sided kilim or Somak: The most delicate Somak kilim belongs to the Caucasus. They are thicker and were first woven by nomads.

One-sided but non-somak kilim: These kilims are woven with simple weaving method, Somak weave and even full knots.

Differences between jajim and kilim

• Jajim is woven thinner and softer than kilim and has a thickness between kilim and fabric.

• The patterns on Jajim are limited because they are created by warp and weft and are mostly vertical or horizontal, but the kilim has no limit in design and pattern.

• Warp is hidden in the kilim and cannot be seen, but since Jajim warp winding is colored, it doubles the beauty of Jajim's design and role.

• The number of jajim warps is more, but the kilim has more delicate warps.

• Jajim consists of interwoven pieces that are connected in a long piece, but the kilim is woven in one piece.

• In Jajim weaving, the loom is placed horizontally on the ground. But in the kilim, it is either vertical or lying down.

Tips on jajim and kilim

• Synthetic colors are used in the texture of some kilims. To find out, rub a wet cloth over the kilim, if the cloth becomes colored, it means that artificial colors have been used.

• Before purchase, it is better to specify the space where you want to spread the kilim in order to know whether kilim is more suitable or Jajim.

• If dust and dirt remain under and inside the roots of the carpet for a long time, it will make the carpet brittle. Despite the vacuum cleaner, this problem is rare today.

• If you want to keep your kilim, jajim, gabbeh, zillu, etc. in the closet or storage room for a while, be sure to put naphthalene or tobacco next to it to prevent moth-eating.

• To wash delicate and artistic kilims, it is better to use carpet shampoo and wash it by hand. Do not use laundry detergent. You can also use detergents for colored clothes. Most importantly, the water temprature should be below 30 degrees.

• If you are looking for a very durable kilim, buy a kilim whose warp is made of fleece or silkbecause it rots later.

• If you want to spread your kilim on ceramic, buy a Somak kilim that is full of knots behind the work and prevents the kilim from slipping. Kilims with embroidered leather edges are also suitable for this purpose.

• If you have sensitive skin, avoid buying kilims and jajim with synthetic fibers. Natural fibers not only do not cause skin allergies and cracked feet, but also to some extent prevent rheumatic pain and simple foot pain.

Your email address cannot be published. Required fields are marked*